Put Your Own Mask On Before Helping the Person Beside You

For better or for worse, Donald Trump has just been inaugurated as President of the USA.  I say better, not because I don't believe that by many objective measures the country isn't better off now than when Obama took office, but better because I wish him and our closest neighbours well.

Throughout Trump's speech, I was reminded of the airline's instructions to "Put your own mask on before helping the person beside you."  Donald Trump sincerely believes that America needs to help itself for awhile.  He doesn't think that the USA is the "shining city on the hill" any more.  There are too many people living in poverty, there is too much crime and drugs, too much fear of terrorism.

Once again I am reminded of Brexit.  The people who are struggling voted for change.  I hope with all my heart, that in four years these struggling people are living a better life and that America is feeling that it can once again look outward instead of inward.

I am also thanking God that I live in a country where most of the citizens feel that they have enough to share with their neighbours from outside.  We feel like our mask is securely on and that we can help the person beside us.
Posted by Susan at 10:37 AM No comments: 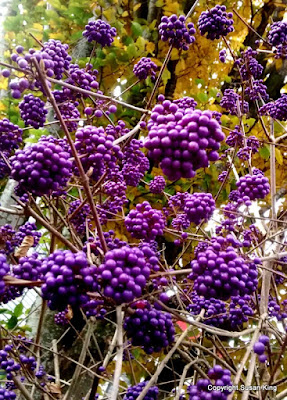 It's been kind of a heavy week.  There is a sense of mourning in the air - Remembrance Day, Leonard Cohen's death, the US election. 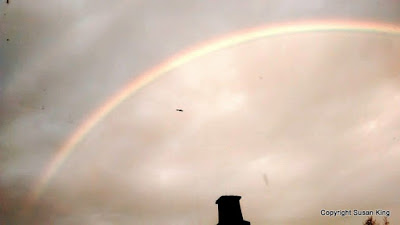 And yet, if we are alert, God's amazing grace is all around us.  In an unexpected flower, a rainbow, a spider's web in the rain. 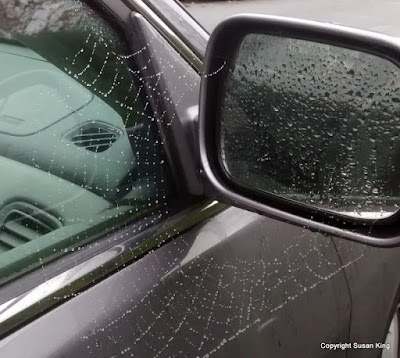 My prayer for us all this day, is that we are able to see and feel God's grace.  Leonard Cohen did.  He asked for it in every poem he wrote.  He knew, that even in the darkness, God is always beside us.  Cohen knew how to talk to God; he was a great psalmist.

You Made a Difference - A Generous Response to the Syrian Crisis

In 2015, the people of The United Church of Canada acted out of love and generosity to support Syrians in new lives in Canada, in refugee camps, and in their homes.

If you would like to help this year, go here.
Posted by Susan at 4:12 PM No comments:

Why Am I Here? Wrestling with Life's Big Questions

I'm struggling with headlines today. Front page: Kim Jung-un, the Most Dangerous Person in the World. Unable to read about the possible horrors awaiting us in the aftermath of North Korea's latest nuclear tests, I flip to the second page. Elizabeth Gilbert, author of Eat, Pray, Love, has revealed her true relationship with her best friend. “Death – or the prospect of death – has a way of clearing away everything that is not real,” she wrote on her Facebook page.

People all over the world will be wrestling with these questions at Alpha, this Fall.  I'm looking forward to listening to what everyone thinks.

Email ThisBlogThis!Share to TwitterShare to FacebookShare to Pinterest
Labels: Alpha

Brexit Lesson 3 - How Should We React When People Leave?

In my last Brexit post, I provided a bit of history to refresh our memories on what has happened in the forty years since Britain joined the EU.

One of the things we saw from the history is that in the European Union, like in most communities, the membership changes over time.  People leave for various reasons and new people join.  That is why it is important to bring in new people, because others will leave.  People leaving isn't in and of itself a bad thing.  It may be inevitable.  So why are those who voted to leave being labelled racist?

I'm not suggesting that there aren't racist people in Britain.  We've seen some ugly evidence of racism since June 23.  But the Leavers aren't all racist.  What is racism, anyway?  Back to the dictionary we go:


Prejudice, discrimination, or antagonism directed against someone of a different race based on the belief that one’s own race is superior

No, the Leavers aren't using racial discrimination based on a belief in racial superiority as a reason for leaving.  Voting to leave due to the economic effects of immigration is not the same as racism.

The other label that the Leavers are being given is ignorant.  Having a different opinion doesn't make them ignorant.

Today's lesson is for everyone who lives in community (i.e. all of us).  We should think carefully before we label someone because they hold different opinions than we do.  Honest and rational debate doesn't need name calling.  If I think honestly about the last time I labelled someone, I catch a whiff of that superiority referred to above in the definition of racism.  Ouch!

So what changed between 1975 and 2016?  Forty years is a long time.  Here are the highlights of the history of the European Union:
By the time of the recent Referendum, the European Union was a very different community from the one that the United Kingdom had ratified in 1975.  Several countries in the Union have had severe banking and fiscal crises.  Youth unemployment in these countries is at an all time high.  Poorer, Eastern European countries have joined.  Migration from these countries to the more affluent countries is occurring.

Had Britain not already have been a member, would they have joined the EU in the last few years?  I don't think anyone would have even tried to argue that it would be in their interest to do so.  So why should we be surprised if they leave?

The lesson here is that bigger is not always better.  As new members join a community, it becomes increasingly difficult to keep everyone's goals in alignment so that continued alliance makes sense for everyone.  Community leaders must work extremely hard to continually monitor and change, if necessary, the constitutions of organizations as membership changes through growth.
Posted by Susan at 12:51 PM 1 comment:

This is another story about spreading love one piece at a time:  http://www.loveyou2.org/.

"What began as a fun love note for my kids has turned into a passion for finding, documenting, installing and sharing love notes.  You can join me changing the world one love note at a time."

Shannon has been going at it since 2010 and it has expanded into other things, including a Ted Talk.

Thanks for sharing this, Janice!
Posted by Susan at 9:58 AM No comments:

Susan
I love learning new things, either in a class or on my own. I've always loved school, reading, and museums. I notice and appreciate beauty and excellence. I'd rather walk than ride, and I'd rather ride my bike than drive. I love sunshine and hearing the birds sing. And I love to sing. LOUD. I'm grateful that I have the time to do these things and pursue my love of paper crafts.